I completely forgot this tournament was on this year because of the postponed euros last summer.

Something to really look forward to. Only 9 months to go. 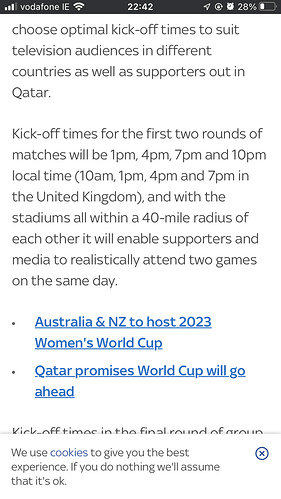 This would be great timing for a career break

November and early December is a very awkward time for World Cup viewing. What time of the day will the matches be on?

Big Tony Holohan will be locking down for Christmas again, cementing WFH for this tournament

Has Stephen Kenny been managing Colombia on the sly?

They have failed to score in their last seven World Cup qualifiers and look set to miss out.

This is woeful fare. God be with the days when Sepp Blatter would bestride a World Cup draw stage like Charlie Haughey at a Fianna Fáil Árd Fheis.

USA in England’s group. England will be happy enough with that.

Repeat of 2010. Netherlands will be delighted to draw Qatar. Jermain Jenas is extremely random.

America knocked out England in 1950 too?

Lothar Matthaus has a nice ball drawing style. An experienced professional on the draw circuit who is finally bringing some gravitas to proceedings here. Nice performative pause before unveiling Germany as Spain’s group opponents.

Some very average teams in this.

The Pot 2 draw has been a bit disappointing. A lot of repeat pairings.

Brazil and Switzerland is a repeat from the last World Cup, as is Portugal and Uruguay. Argentina and Mexico always seem to run into each other.

But the Pot 3 draw is explosive!

Iran in with England and the USA!

Qatar will do well to progress at the expense of Senegal and the Netherlands even accounting for copious amounts of dubious calls in their favour.

Brazil, Switzerland and Serbia is an exact repeat of the 2018 group. Means another Kosovo derby.

I’ll give them one thing. There is less fuck acting around in between drawing pots.

That’s a super draw for the Dutch.

This will be some shit when they go to 46 teams.