I have no time for Bertie but I have to laugh at some of the crackpots involved in politics in the Occupied Six. Check out the lad’s quote below about today’s visit being more evidence of the type of ‘north/southery’ he doesn’t approve of. Some of them are so insular and afraid of any kind of investment that would improve the situation up there. It seems like they’d rather go back to the way things were.

Here’s a picture of Ruby Gillespie being escorted away from the premises! 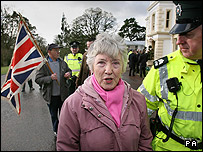 Ian Paisley has described Irish Prime Minister Bertie Ahern’s historic visit to his constituency of Ballymena as a “good day for Ireland”.

The first minister was speaking as he and Mr Ahern toured the Galgorm Resort Hotel and Spa where they discussed how to promote tourism in Ireland.

“It is a good day for the whole of Ireland because we need help from outside,” Mr Paisley said.

Mr Ahern said he was honoured to have visited Mr Paisley’s heartland.

“It is an honour to be here with the first minister to talk about progress.”

Both men said it was important that the two parts of the island worked together for their mutual economic benefit.

“Guaranteeing investment and employment is a goal and objective we share and I do not think there is any sector of an economy that cannot grow and gain added value through cooperation,” Mr Ahern said.

Earlier, a small number of people held a protest during the tour.

Town councillor Roy Gillespie, a former DUP member, unfurled a Union flag outside, while his wife, Ruby, was asked to leave the meeting after confronting Mr Paisley’s wife, Eileen.

Mr Gillespie left the DUP over its decision to share power with Sinn Fein.

MEP Jim Allister, who also left the DUP in protest, said the “spectacle at Galgorm is yet another manifestation of the dramatic intensification in north/southery which is occurring under devolution”.

Last year, Mr Paisley and Mr Ahern visited the site of the 1690 Battle of the Boyne in County Meath.

Mr Ahern and Mr Paisley agreed to the visit after talks in Dublin between the two men.