I see the execution of ‘Chemical Ali’ has been approved by the Iraqi authorities. It got me thinking about ‘Comical Ali’ - does anyone remember what happened to him? I recall the quality interviews he gave about making the bloody infidels suffer and how they were destroying the US troops in battle and had secured Baghdad International Airport and killed all the American soldiers there. Then as he continued speaking the channel invariably cut to pictures of US troops down at the airport ‘high-fiving’ each other and sticking up stars and stripes flags around the place. And poor Ali would still be talking over the pictures giving an account of the ‘Iraqi rout’. 'Twas comedy gold and it also afforded a good opportunity for photoshop whizz-kids. There was some crackers doing the rounds last year of Ali outside Ibrox with a speech bubble proclaiming that Paul Le Guen was going to win a European Cup if only he was given sufficient time etc. I hope he hasn’t been executed.

Also, some media outlets have revealed where Prince Harry is being deployed and now there’s a concern that he could become a Taleban target. I was strolling into town last night and, when passing by an electrics shop that had Sky News on a TV in the window, I noticed a Breaking News alert, a picture of Prince Harry and a big banner headline and I was raging then when I saw that’s all it was. I had momentarily got my hopes up but I suppose this is all a load of rubbish anyway. I’d wager that Harry remains at base all day every day playing with his colouring books and has never seen the front line. Then the ‘royal family’ spin doctors tell naive British people about Harry being one of them and fighting to secure the nation’s safety and their popularity soars. 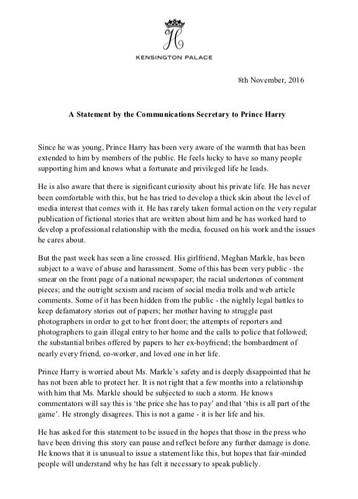 Wouldn’t you think they could just offer some kind of tattle to the press in a trade off for some peace and quiet? Suppose just too much social media these days and that ship has sailed

It’s Megan I feel sorry for

It’s Megan I feel sorry for

I hope he dies in his sleep tonight

Why are Kensington Palace releasing a statement about a couple, neither of whom is a member of the royal family??