The pertinent question is - would you give her one? 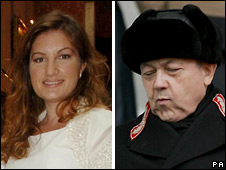 Think she’s on the left in that one.

She’s the one with the long hair in that one.

Brady and Sullivan say they are “committed to helping police”

City of London Police investigating alleged corruption in English football said they arrested a man, 59, and a woman 39, on Wednesday.

The pair were questioned in connection with allegations of false accounting and conspiracy to defraud.

A club statement said it was “fully committed to helping police with their inquiries”. Both were bailed.

The statement said: "David Sullivan and Karren Brady on behalf of Birmingham City Football Club were invited to co-operate with a City of London Police investigation and have happily done so.

“By longstanding appointment, they have willingly attended interviews today.”

Seven other people are currently on bail as part of the investigation by City of London Police.

Among those previously arrested during the investigation are Portsmouth manager Harry Redknapp, the club’s chief executive Peter Storrie and former chairman Milan Mandaric.

Paul Peschisholido is rodgering her by night. You’ll have to catch her unawares during the day i’d say, although if you helped her with bail then who knows…

Birmingham have suspended trading on their shares pending an announcement this morning.

I’d say the Power gave her one.

The pertinent question is - would you give her one?