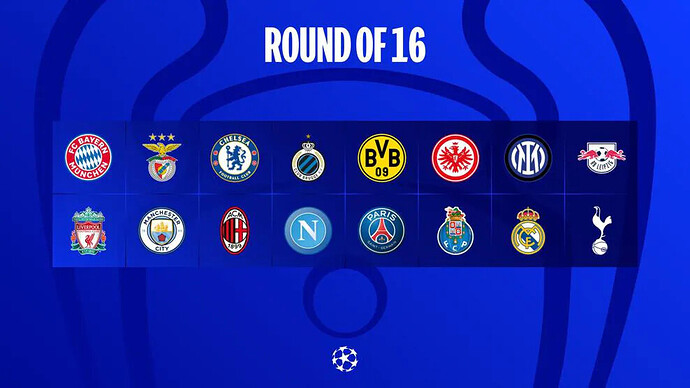 When is the draw?

Well, the options are Bayern, Real, Benfica or our good pals over in Porto.

Yes. We did an away trip to Porto a few years back. Have great pals over there.

I think thats the joke mate.

It wouldn’t be a Champions League draw live blog without The Permutations™, would it? So who can each of the English teams, our brave boys, be drawn against?

Chelsea finished top of Group E, recovering from a shock defeat against Dinamo Zagreb and a draw against Atlético Caffeine – sorry, Red Bull Salzburg – to win their last four European fixtures on the bounce. As such, they will be drawn against one of Borussia Dortmund, Club Brugge, Eintracht Frankfurt, Internazionale, PSG or RB Leipzig. They can’t be drawn against Liverpool or Milan, the former on account of their mutual Englishness and the latter on account of having already spanked them twice in the group.

Moving on to Liverpool, who finished second to an extremely spicy Napoli side in Group A. They will be drawn against one of Bayern Munich, Benfica, Porto or Real Madrid, meaning we could see a rematch of last year’s final.

Liverpool are European Royalty, they’ll get a handy one. I’m going to say Porto

Are all the Italian teams out?

Edit: Got this off RTE.ie. Are Porto playing Bayern Munich?

2nd Edit: went to BBC.co.uk and got the actual draw. Darren must have been updating the RTE Sport app

happy enough with that, saw inter last night & they wernt up to much

happy enough with that, saw inter last night & they wernt up to much

I think we should have no trouble dealing with London Spurs