No Brown or Armstrong today. Sviatchenko is back training but I imagine he’s a long way off fitness.

Not sure who can do defensive cover if Bitton replaces Brown. I guess it’s Ralston with Lustig moving inside but Ralston himself is carrying an injury and is unavailable for a few weeks after today.

I think McGregor should come back into the team anyway. Rogic was our most ineffective player the other night and McGregor brings a better balance to midfield, especially if Brown is missing to control possession from deep.

@Rocko, can you merge this with the thread I simultaneously set up?

@Rocko, official team news to follow but are you hearing that Griffiths is being rested against his boyhood team?

Brown and Armstrong are injured.

Lennon, Stokes and Ambrose are likely to receive a warm welcome back to Celtic Park pre kick-off.

@Rocko, official team news to follow but are you hearing that Griffiths is being rested against his boyhood team?

I am indeed hearing this. Not surprised really. Dembélé needs a start.

A good test today on the back of a midweek CL away game and with key players injured.

Quite a few changes. Back 3. 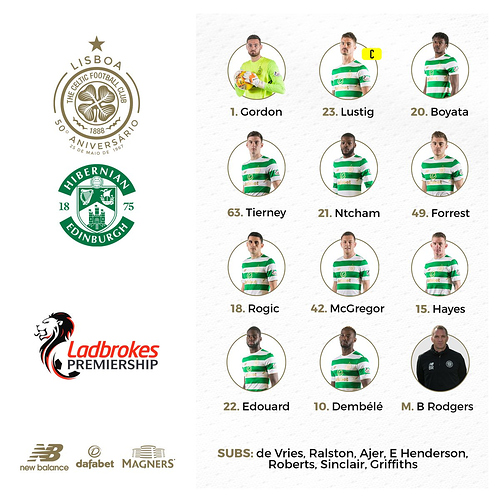 I’d say that’s it alright. Surprised that Sinclair is rested as he won’t have any international commitments. Hopefully they’re just managing Simunovic’s workload too.

Liam Henderson is playing with the U23s in the Premier League International Cup at the moment. Surprised that his younger brother has been taken from that squad to feature with the first team instead of him.

McGeouch starting for Hibs too along with Ambrose and Stokes.

Have lumped on Celtic -2 and a Celtic win with Dembele scoring. Have the feeling we will see some champagne football after the massive win midweek

Beautiful move and finish after a strong start by Hibs.

Lovely goal. Great contributions from Tierney and Dembélé. McGregor is a lovely footballer.

Rogic probably should have passed there. He’s bullied McGinn a couple of times already.

Rogic robbed McGinn there but had a dribble and shot when he could have played Edouard in.