Manchester City are at home to Celtic in tonight’s pivotal match.

Jim McGuinness and his Celtic youth side just blew a 2-0 lead to lose 3-2 in injury time in the UYCL clash. McGuinness out. 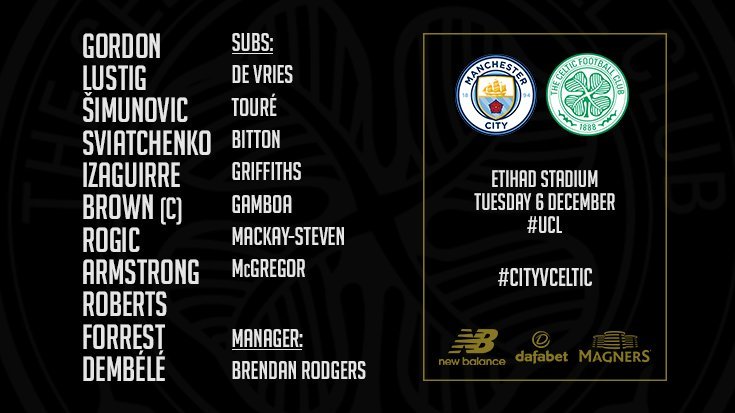 I’m chasing betting losses from the weekend. Is there any reason I shouldn’t pile on arsenal at 11/10 to beat Basel tonight? Will they be going for the win or be happy with a draw?

No. I’m gonna go arsenal minus one. PP are 9/2 on arsenal city and barca all winning.

A bunch of lads who have to prove themselves for city. I reckon they’ll do it.

All Celtic so far.

Keith Andrews is a moron unfortunately.

Are city drunk or something?
Nice play all round from celtic so far.

Very easy for City there.

Gordon’s gotta be saving that

I’m on BT Sport, even though it’s not the usual Celtic lineup. Acknowledging their English audience with Darke and the annoying Savage.

Gordon should have saved that. 1-1.

“You feel the net is going to absolutely ripple!”

bit of an oxymoron there alright. Think burst was the word he was looking for.