It's grim up North

The Real IRA has claimed responsibility for a bomb that exploded this morning in a hijacked taxi behind a British army barracks in Holywood, Co Down.

The Real IRA has claimed responsibility for a bomb that exploded this morning in a hijacked taxi behind a British army barracks in Holywood, Co Down.

One elderly man was injured in the 12.24am attack at Palace Barracks in Holywood, Co Down, which houses the headquarters of MI5’s security services in Northern Ireland.

The attack was timed to coincide with the devolution of policing and justice powers from Westminster to the Stormont Assembly today.

Intelligence issues handled by MI5 will remain under British control despite the transfer. A taxi driver in north Belfast was held hostage for two hours before he was forced to drive the bomb to the base in his car.

Security personnel were evacuating the area when the device exploded, and some of the 30 to 40 residents who were fleeing the scene at the time described diving for cover to avoid shrapnel from the blast.

“The taxi driver got out [of the car] and shouted ‘It’s a bomb, it’s a bomb!’ and we were evacuating the area when it exploded,” a police spokeswoman said.

The attack came as responsibility for law and order policy was transferred from London to Belfast at midnight, marking the end of 38 years of Whitehall control.

An overnight arson attack that saw 10 people rescued from a fire in an apartment block in Co Down is being treated as a suspected hate crime, police said today.

Detectives investigating the deliberate blaze in the four-storey building in Newry’s Corn Market, confirmed a racial motive is one line of inquiry being pursued. Five of those led to safety by firefighters had to be treated for smoke inhalation.

The fire broke out just before 3am in a bookmaker’s shop on the ground floor of the building. A passer-by who noticed the flames while residents slept upstairs was the first to report the incident. Six of the 16 residents in the seven-flat block managed to escape before fire crews arrived.

All the inhabitants are foreign nationals, understood to be of eastern European origin. Among them are young children and pensioners.

Another bomb detonates outside a police station in Lurgan. Seems like it’s only a matter of time before one of these incidents is going to involve civilian casualties. The longer these go on the more ambitious the people behind them are going to get.

There’s a recession on, it makes sense to going back to the troubles, there’s money to be made in such times.

A Tory government will help matters. I feel sure of it.

There isn’t the will or support for these guys anymore, the civil rights is what carried them, things are pretty much on an even keel that way these days. Obviously there are still stories out there and some discrimination, but nothing like there was.

There isn’t the will or support for these guys anymore, the civil rights is what carried them, things are pretty much on an even keel that way these days. Obviously there are still stories out there and some discrimination, but nothing like there was.

Probably not much popular support and I’d say they’re aware of that themselves. The objective I’d suspect is political destabilisation. A major incident with civilian casualties could well exacerbate a political crisis at Stormont to the point where some of the old divides return. Budget cuts around the corner, a Tory government in waiting, you never know what could happen.

Ya true. Haven’t followed it that much, but the Brit gov elections would be vital alright.

I’m a Nationalist myself, but its beyond stupidity to think anything will ever be solved with a bomb at this stage.

Ya true. Haven’t followed it that much, but the Brit gov elections would be vital alright.

I’m a Nationalist myself, but its beyond stupidity to think anything will ever be solved with a bomb at this stage.

Steven Segal once stoped an oil rig fire buy using explosives so that was one thing that was solved by bombing.
I’m grasping though.

Steven Segal once stoped an oil rig fire buy using explosives so that was one thing that was solved by bombing.
I’m grasping though.

Obviously i know your messing, but for clarity, i’m talking of present day northern ireland. I believe there was a time way back when it was the only thing open to them. And this hs been the case in many many places around the world.

I’m a Nationalist myself,

Willie O’Dea…He’s in the 'Ra

This is just one modern day description of it, my political and cultural inclinations would definitely fall under this description, you stupid cunt;

The North is the most bigoted place in the western world, according to research conducted at the University of Ulster.

The finding, which is due to be published in a leading economics journal, is based on a survey of almost 32,000 people in 23 countries.

They were asked how they would feel living beside Muslims, Jews, homosexuals or people of another race.

Forty-four per cent of respondents in the North said they did not want people from these groups living next door.

The main targets of the prejudice were gays, followed by foreign workers.

The North came in just ahead of Greece for levels of bigotry, with the lowest incidence of prejudice found to be in Sweden, Iceland, Canada and Denmark.

Willie O’Dea…He’s in the 'Ra

Almost two-thirds of older people in Northern Ireland cannot afford to heat their home through the winter, according to a survey.

The fuel poverty rate among people aged over 60 is up 15 per cent on four years ago and now stands at 60.5 per cent, according to the latest House Conditions Survey.

The research done by the North’s Housing Executive finds the situation is even worse for older people living on their own - with almost four fifths officially designated as living in fuel poverty.

Age NI, a new charity combining Age Concern NI and Help the Aged, have demanded action from the Stormont Executive.

The fuel poverty issue cuts across a number of government departments as it is related to benefit payments, housing stock and also energy costs.

“It is shameful that in 2010 the number of older people struggling to keep warm is not only increasing, but doing so at a frightening rate,” she said.

“In 2008, Age NI warned our political leaders that older people were in the impossible position of having to choose between eating and heating their homes. In two years, nothing has changed for the better.”

Ms O‘Reilly said people in Northern Ireland had a harder time because they do not have access to the same level of energy tariff discounts available in England, Scotland and Wales.

“Older people in Northern Ireland are not being afforded the same level of protection as their GB counterparts but the introduction of social tariffs here could make a vital difference,” she said.

Someone is classed as being in fuel poverty if they spend more than 10 per cent of their income on fuel.

A spokesman for Social Development minister Alex Attwood agreed that fuel poverty must be addressed.

“Minister Attwood agrees with Age NI that the new levels of fuel poverty, especially given benefit cuts in last week’s budget, should be a call for action across government departments,” he said.

"This should be a further impetus for further action.” 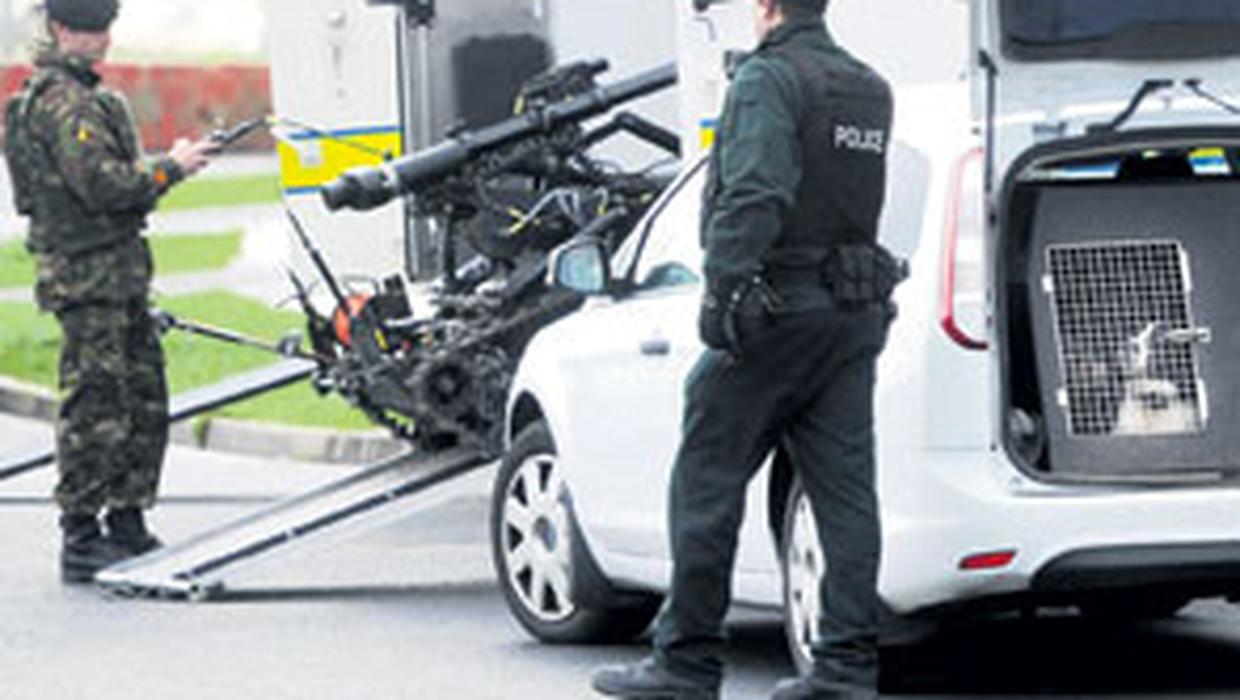 Blunder may have led to murder bid on soldier

SENIOR police officers in the North are furious after a military security blunder led to a dissident republican murder bid on a British soldier.

Blunder may have led to murder bid on soldier

By Adrian Rutherford
Saturday January 07 2012
SENIOR police officers in the North are furious after a military security blunder led to a dissident republican murder bid on a British soldier.
The soldier escaped unhurt after spotting the device, which had been left by the dissident IRA group Oglaigh na hEireann, underneath the driver’s seat of his car in north Belfast.
A stolen Irish Army grenade was placed inside his car. The device was linked to a seatbelt buckle. The idea was when the soldier pulled the belt he would trigger the grenade.
It is understood he may have alerted the terror group to his whereabouts after driving around the area and telling local people that he was a soldier.
The soldier, who is in his early 20s and from Scotland, is likely to be interviewed about his personal security arrangements once he returns to his regiment. He could also face disciplinary action.
One security source said senior PSNI figures were “very concerned and unhappy” about the incident.
An MoD spokesman declined to comment, adding that security in Northern Ireland is a matter for the PSNI.
The soldier was staying with his 24-year-old girlfriend at Blackdam Court in the Ligoniel area when the device was planted inside the red Vauxhall Astra. It was discovered as the couple went to collect a two-and-a-half-year-old girl.
It is understood the soldier, who has since returned to Scotland, saw the device as he pushed the driver’s seat forward to create more room for a baby chair.

Two things here…do British Army personnel routinely walk around the north telling lads their in ‘the forces’? :lol:
Is there any chance the Irish Defence Forces could tighten up things, a stolen grenade ffs, would it not be a tad enbarrassing for the army if one of their grenades was used to kill people in the north and destabilise the political situation up there? Should be a full miiitary police investigation into the origin of that grenade, where it went missing and how it ended in dissident hands.