Because he was caught before he assaulted her he gets a minimal sentence. Great system

@estebandaface is there a trouble maker up around Rosbrien/Ballinacurra with a surname Barry? Dean Barry is coming to my mind… This fella related?

Just googled… Dean Barry Garryglass… Was one of the cratloe rapists

Silence from @cowpat all of a sudden

He hung himself in limerick jail.

That’s right… I knew the surname from that area was familiar. Has to be related… There cant be too many Barrys on Garryglass avenue.

They were from beside the shop in Weston if memory is correct. 3 brothers, at least one dead by suicide, if not two. I think anyway

Is he the fella that said “She was mad for it, judge” in court at that Cratloe case?

I don’t know pal. Himself and thomas O’Neill were always dangerous evil little bastards though.

My I ask the legal experts. The replies to that suggest that the judge had no option in the length of sentence. Is this true? If so, did he also have to suspend the last nine months?

Where most 65 yr old men would dream of being…

How was he ‘found’ I’d love to know. You wouldn’t have guards out around there too often I’d say? What garda station would service O’Brien’s Bridge?

Here’s how he was found 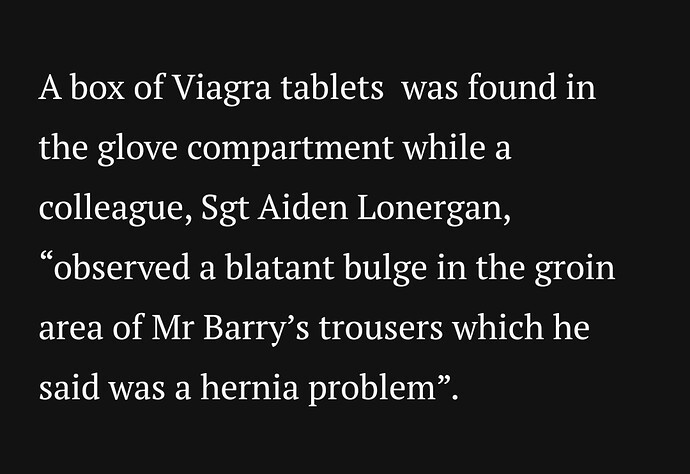 Thomas O’Neill, or April’s Fool as he’s known. It’s a funny old world; I’m sure glad it’s him and his ilk that play those roles and not I. There, but for the grace of God, etc.

How was he ‘found’ I’d love to know. You wouldn’t have guards out around there too often I’d say? What garda station would service O’Brien’s Bridge?

It would be odd to see a car parked there late at night anyway so maybe a passing motorist became suspicious enough to report it.
Killaloe station would patrol that area, I presume, or possibly Castleconnell.