May or may not have been going through Ennistymon yesterday. All the doorways had a branch from a horse chestnut. Like this

Never seen it before. Missus who is from Wexford said she’d guess it’s for May Day as they do stuff to mark the event. Huh?

Said her folks had this up: 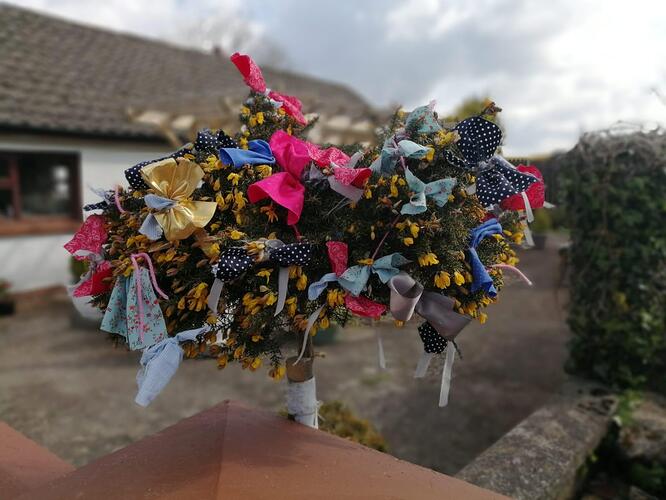 I honestly don’t recall anything significant about may bank holiday weekend other than marking start of summer holiday season.

Any of ye mark it?

Did ye not have a statue of our lady at front of class for the month of May growing up?

They have a bonfire in limerick city on May Eve. To either attract or keep away the fairies

I only ever remember seeing them bonfires in Weston. Can’t recall seeing them anywhere else around Limerick tbh.

That was great reading, appreciate the steer

My sister lives down there between Ennistymon and Lahinch, she sent us a photo of their May branch hanging up.

We threw holy water at the doors on May eve.
Keeps the bad fairies away.

I thought this thread was going to be about the lack of waxing facilities due to Covid.

The fairies go on the move on May eve, but sure no one would be stupid enough to build their house on a fairy path.

Wuhan is built on a fairy path sure

You mean the Wuhan Institute of Virology with a special focus on the transfer of viruses from bats to humans is built on a fairy path.

Huh? Always had them in Corbally… And most other parts of Limerick

Bonfires were everywhere, we used to fight battles with Garryowen for their pallets

The mother was firing holy water everywhere the other night. No fairy attacks since.

They still have them in those areas, the lads in school were on about bonfires in Westton, Moyross and Southill,

I passed one in Weston still smouldeting early yesterday morning, destroyed the entire green just off the Childers road

The faeries made them forget to renew the freezer maintenance contract.