The defence of the league cup continues. Kick off 18.15 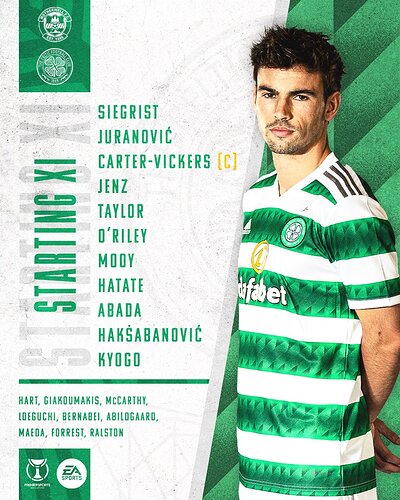 That was very nicely done. Abada has great goal scoring instincts. He’s always on the move from the wide starting position into the middle of the goal. Kyogo should have taken at least one of his two earlier chances.

Thought that was an excellent save for his last chance. Your man Kelly is linked with going back to the Huns in January. Easy to think he should have lifted it but thought he was right to try and slip it under him.

Apart from the Jenz moment of madness and a couple of sloppy passes we’ve played quite well.

Not sure about Jenz yet. Could do with Starfelt coming back.

He’s not great one v one in terms of dribbling past players and he’s not lightning quick, but his movement, finishing, awareness and choice/selection of pass or cross is usually a very high standard. If he continues to improve with experience, he could end up becoming a top five league regular.

Unreal skill. Hatate has been excellent this season.

Agreed. Not very ambitious if that’s who they’re targeting.

Some feet from Hatate

Young Aaron Mooy is growing more influential by the game.

He’s looking sharper and fitter too so that’s allowing him to showcase his football more. He’s definitely a handy player, two footed, can pick out a pass. Not sure if he’d played much football this calendar year? So might have had more catching up to do.