Everyone available other than Dembélé I think

I expect just the one change - Griffiths for Dembélé. I reckon Rodgers will rest a few players after this game ahead of the cup final irrespective of whether the chance to go through the league campaign unbeaten remains or not. Celtic are back in pre-season training ahead of the European qualifiers a week after Scotland play England in June so he might give Brown, Tierney, Armstrong a couple of games off.

I concur with this analysis. Hope Roberts starts again too, he had them on the ropes from the start last week. We are quite lightweight with him and Griffiths in the team but it’s not like Forrest offers much more physicality.

Only the one change. 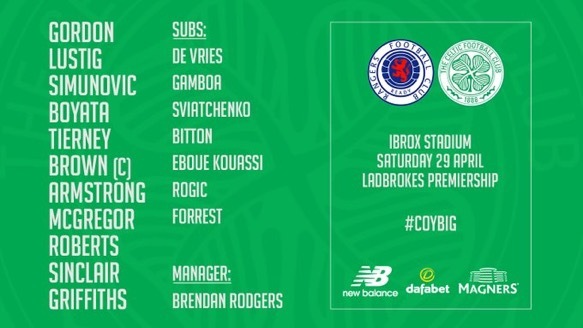 They have the same team that started the second half last week but with Bates dropped for Hill too.

I imagine this could turn into a savage bile fest. 2 weeks in a row is dangerous. I predict at least 2 red cards.

What is this on Sky or BT?

What an idiotic challenge.

This could be anything goals wise for Celtic.

That’s about the dumbest penalty I’ve ever seen.

Several of the Sevco players appear to be attacking the wrong goal.

Is he drunk or just stupid .

Agent Pedro Caixinha looks like he could be the Generalisimo of a Latin American country.