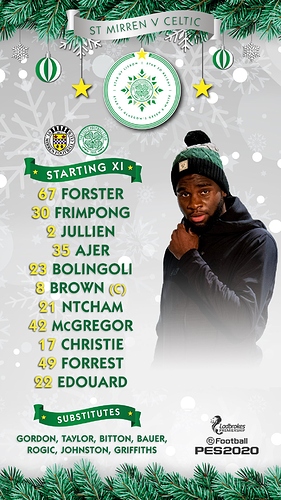 No new injuries. Would have preferred to have Johnston back starting because we are more threatening with Forrest on the right and Christie in the middle, even apart from what he brings. Hopefully he’s fit for Sunday.

I’d imagine this will be the team for Sunday, again I must say that there should be far more rotation happening here.

I can’t see Elyounoussi being thrown in at the deep end on Sunday given the way he struggled in the cup final after a lay off.

I’m not sure exactly what the story is with Johnston as either Lennon doesn’t fully trust him yet or else he’s not durable enough to be playing 90 minutes in succession.

I’d have had Rogic starting today at the very least.

Elyounoussi is out until after the winter break.

I think Johnston is purely fitness. He’s been picking up regular knocks unfortunately.

Bit of luck there but Edouard did well.

For a big guy, Forster doesn’t inspire me on crosses, it’s probably the weakest part of his game as a keeper.

Ntcham has been playing really well over the past month or so.

Edouard with a lovely goal ruled out there.

I only saw bits and pieces of the match due to Christmas visiting / visitors and a trip to Clonard church to see the new tapestry (cc Roman Catholic thread shortly).

I’d say that’ll be the starting team on Sunday too. Lennon likes Ntcham and seems to be making a real point of praising him in public and trying to build him up. He’s playing fairly well too but playing him means shifting Christie from centre to right and Forrest from right to left. Both of them still generally contribute well but they’re more effective in the other positions.

That said, the huns had much the better of general play in the final a few weeks ago so I’m okay with him changing the midfield up a bit.

That said, the huns had much the better of general play in the final a few weeks ago so I’m okay with him changing the midfield up a bit.

Yeah I think that’s probably the main reason for it. Rogic won’t get a look in for that reason either because he’s too loose there. I thought Aribo caused a few problems early on in the first game when he played in front of Ajer. Brown and McGregor are nominally right and left side of the pitch but Brown tends to be deeper and there’s a gap there on McGregor’s side that we need to fill better.

Rogic has been a bit part player for the last year or so. He’s been injured on and off (think he missed a lot of the summer qualifier games) but hasn’t had a run of games. Christie’s emergence has probably affected his game time too. Not sure where I’m going with this but he’s gone from being main creative outlet to reserve to the reserve attacking centre midfield option. He signed a contract extension while back too but I wonder if he’ll be away in the summer.