Chucks (Nwoko Knows), Blake, (The Teabag Teabaggers) Turenne (The Ironsides), Fran (Fran San Frisco 49ers) and fistsoffury (notthejets) are hold over franchises who were previously in this league so ye guys shouldn’t have to register/join the league.

I will send a PM to the rest of the competitors with the league details. @the_man_himself you will need to set up an account on https://fantasy.nfl.com/

Once all teams are registered I will randomise the draft order and set up a draft date. Sunday the 30th of August or Sunday the 6th of September would are the provisional dates - let me know which one suits better

Put the drafts on late in the day. 10pm is good

It would normally be around a 9pm kick off for the draft. Im sure the later the better for Turenne and Chucks will suit as well

30th August works fine for me if it’s late in the day. I’m working until 6.

@Big_Brian_Lohan I registered there. I’m “Open the pubs” in case you need to keep track

Either date is fine, as late as possible

Either date is good

Where do ye guys stand on draft dates? Next Sunday the 30th or Sunday the 6th of September, can anyone who hasn’t already please let me know the preference and we will go with whichever has the majority. Probably around a 9:30pm or 10pm start time if that suits

I’ve three drafts on the 6th so would rather the 30th but majority rules.

Right folks - still waiting for one more team to join. Whoever it is can you do so in the next few days.

Nobody has too strong feelings on the draft. Am going to push to Sunday week at 10pm so it is speak now or forever hold your peace.

Right so, draft is this Sunday, do we have the order sorted and do we have a full compliment of franchises?

We have full compliment. I will randomise the draft order in the next day or so

Draft order had been randomised

Draft will commence at 10pm this Sunday night 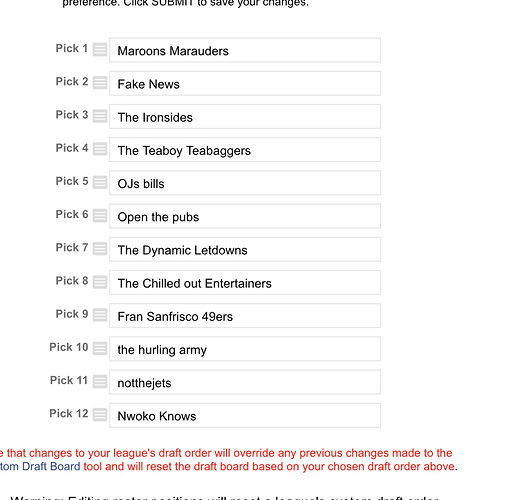 Can you throw up a list of who is which team? Handy post to bookmark so you know who to throw shade at each week.

Reminder - draft is at 10pm tonight