A long overdue thread to record and discuss train crashes on the Iberian Peninsula.

I’ll start us off with yesterday evening’s derailment in Galícia. Death toll at 77 and rising. I’m ruling out foul play and terrorism. I’m not ruling out reckless speed.

why has this thread being given unofficial status?

I’m blaming a Manuel type figure at the controls, most likely from Barcelona.

The driver had reportedly been going at twice the speed limit, which was set much lower on that stretch of track specifically because of the dangerous bend where the crash occurred. 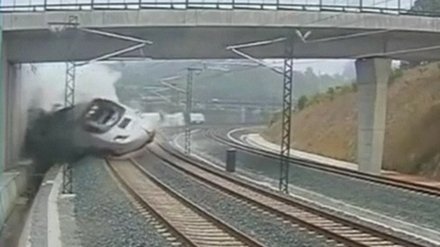 lets get back on track here,
Rocko can you think of any other memorable train crashes?

the driver must have been loco

Fellas are starting to go off the rail here show some respect.

Fellas are starting to go off the rail here show some respect.

well done WYT, another thread derailed by you :rolleyes:

As Im on a bus I cant tell whether Farmer posted the video or just a still photo but I can say Im worried about my bus driver doing something similar here to what the train driver did. Hes just bombed through the M50 junction at Blanch at about 70 mph.In fact hes actually reached the Quays in the time its taken me to write this, hes going so fast.

Bandage can you please arrange dungeon for this thread and organise disciplinary action for Rocko. Thank you.

Over 100 were killed when the pride of the Deutsche Bahn fleet, the ICE train crashed at top speed at Eschede in June 1998. Gernam engineering was squarely to blame.

I hope RTE change the name of their defunct fashion show, Off The Rails, as a mark of respect to the victims.

Chris is always the man to capture the mood perfectly in the wake of such a disaster. A true great.

Supposed to have been on the phone when it crashed!