Versus Davy - Who'll throw or Land the first Dig?

I’m going with Mullane. I’d even cash in my prize bonds just to see the dwarf from the banner and the albino mad man from the Decies go at it. Guaranteed Dog Fight.

After Mullane, it must be a Langer so, Donal Og; Handbags hanging off the crosser?

There must be a target from the sidelines; would love it to be Cody, but I can definately see Ger L give his former pup a clatter that would send him yelping into the tunnel.

I just love the summer, don’t you?

Will definitely add a bit of spice to things alright.

I’m going to go for a random supporter hoping over the hoardings and clocking him one after he turns to the opposition crowd and starts doing a semi-pirouette jig turning into a half set following a Waterford score. 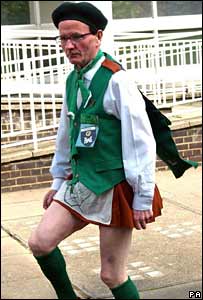 “The Runt” For fook sake.

flano stick to sci fi will you…

Take it to the talking balls lads…

“The Runt” For fook sake.

Take it to the talking balls lads…

Have I done something bad??

And why the fcuk does it say Jamie Redknapp under my name???

And why the fcuk does it say Jamie Redknapp under my name???

[/quote]
You’ll get to know Flano and Shermin, Runt.

Redknapp is your Punter value. More posts you have the better the punter.

Must change the punter orders again - they could do with a refresh now and again. Must have been deluded the last time I did them because I left Bobby George as top man which is ridiculous. Ted Walsh will always be king pundit to me.

I think they’re all wankers

Bobby George. The King of Darts. Of course Bristow, proper legend, mugged him off and made a fool of him in the League of legends two weeks ago.

I think they’re all wankers

Agreed these AFR lads are no value at all!

Is that a tattoo on Dan’s face?

I think Dan is the only one listening to Davy. Notice everyone to the left and behind the leprechaun is looking away. I think there’ll be a players meeting by the end of the week where they’ll force Davy to “resign” after his great 7 years…sorry, days, of service to Waterford hurling.

No player meetings in that camp going forward. It’ll be

The next team building trip will be to Mount Mell. Hope Eoin remembers to bring his prayer book instead of his passport http://www.thefreekick.com/board/public/style_emoticons/<#EMO_DIR#>/tongue.gif

When’s their next game anyway? (need to clear the diary!)