Huge news today. Nearly everybody expected Spain to be chosen.

Clearly the captain must have the respect of the locker room and possess leadership qualities but I think the role is also representative.

It involves a lot of media work, speech making, sponsorship commitments and so on and I think the captain should definitely have Leaving Cert or equivalent French at a minimum.

As for the captaincy, the host country always pushes for a home captain but that’s never been set in stone - just look at Woosie at the K Club and Monty at Celtic Manor, for example.

This can serve to be the official thread for the 2018 Ryder Cup.

How is Team Europe shaping up? John Rahm will be a great addition. 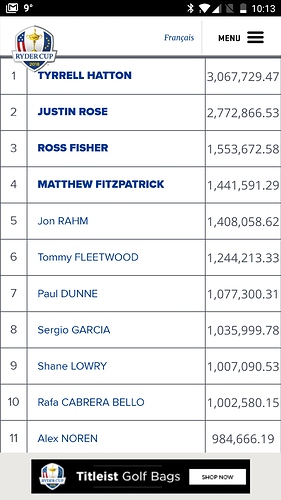 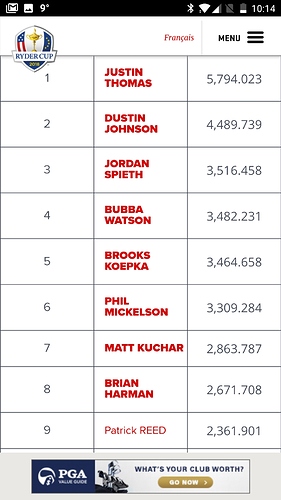 Who in gods name is tyrell hatton

He’s like a middle England version of Patrick Reed

Who in gods name is tyrell hatton

I think he/it is either an early 1990s US cruiserweight boxer or a dodgy City investment firm.

All the Americans collapsed today.
European grit out does those target golf boys.

How is Team Europe shaping up now?

I think it would be great if Team Europe could get this Southgate fellow onto the Ryder Cup team for France.

European players always rise to the occasion of the Ryder Cup, they love Europe.
The Monty Factor I like to call it to myself when I’m watching the Ryder Cup

Four wilcards to be announced in early September.

The USA team will surely get a team talk from President Trump .

He’s gonna be a wildcard.

He’s gonna be a wildcard.

Haimself and Kim Jong-Un are the respective captains for the next edition of the President’s Cup.

When do Europe select their wildcards?

Who is the captain this year? He can’t be any worse than Dunlop Darren was last time.

Sergio Garcia gets in