This man now deserves a thread of his own. Part 1 of Woolie’s podcast today focused on him, and also this article by Malachy Clerkin. 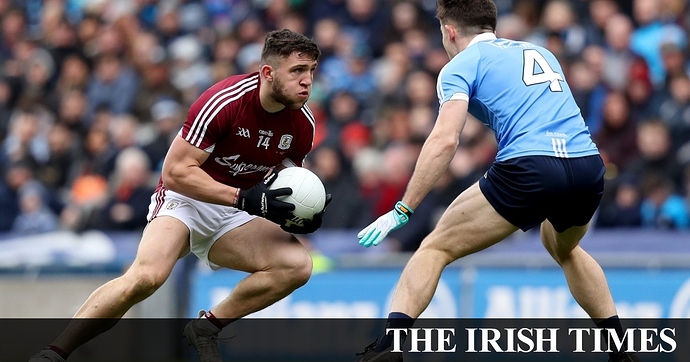 Damien Comer took on Dublin like an over-sugared toddler

Damien Comer plays football like somebody dared him not to. In another life, he’d have heard John L Sullivan belly up to the bar declaring he’d lick any man in the house and immediately shot his hand in the air looking for his go. He has the look of a fella who’d be hard to teach to ski – one minute you’d be explaining the snow-plough to him, next he’d be halfway down the black slope, Franz Klammer to the max.

They gave Ciarán Kilkenny Laoch na hImeartha here, a sort default choice on a day Dublin ground out the win without anyone in blue managing much beyond a polite simmer. Paul Mannion faded after a blitzkrieg start and Eric Lowndes put in a forceful second half after coming on for the injured James McCarthy. But if it’s a laoch you were after, the only place to look was at the Galway number 14 as he pinballed around the place like an over-sugared toddler.

Being asked to mark him in this sort of mood must be like getting the job of breaking a bronco. Three Dublin players fouled him inside the opening 17 minutes. Philly McMahon was skinned twice, once ending up with a yellow card, next time floundering in his wake as Comer popped his first point. Jonny Cooper and Niall Scully got the treatment too – both of their transgressions ended with Barry McHugh nailing the resultant frees.

Cooper kept trying to convince referee Anthony Nolan that Comer was diving. Whatever about the irony involved – I say Mr Pot, have you met Mr Kettle? – any theatrics on Comer’s part were only the punchline. In each case, he had already done the set-up by taking on whichever Dublin player stood in his way and bursting far enough past him that he could make any tackle look like a foul. Not many forwards get to make that case against the Dublin defence. It’s hard to think of many who even try.

Looking for mischief
Dublin’s plan for Comer was a man-marker on the edge of the square and a sweeper patrolling the arc in front of him. When he was close to goal, McMahon shadowed him. When he wandered out looking for mischief, Cooper latched on. The two toughest, crankiest markers in the Dublin defence and neither of them was able to leave their mark on him. He made Batman and Robin look like Del and Rodney.

As it happened, the most effective deterrent to Comer all day wasn’t a Dublin player. It wasn’t a player at all, in fact. It was more just the ponderous nature of Galway’s breakaway work. Had they been able to move the ball quicker in response to the turnovers they were making in defence, they would have involved Comer more in the game. As it was, they all too often got gummed up around midfield and gave Dublin time to funnel back in front of their full-forward. Ain’t nothing more useless than an unloaded gun.

As Dublin are wont to do, they reassessed at half-time and changed it up a little. Mick Fitzsimons was handed the gig for the second half and played Comer from the side with relish. With Dublin flexing further out the field in the third quarter, Galway’s target man was even more starved for ball but he still managed to winkle out a couple of scores as the game progressed.

His second point of the afternoon was Uber-Comer. A failed point attempt from Peter Cooke dropped on the edge of the square, a defender’s ball all day long. Fitzsimons did everything you’re supposed to do – anticipated the miscue, got out in front, positioned his body so that he had first jump on the ball and made sure that if Comer was going to do anything worthwhile, he would have to pull off something mad like leaping over him from behind and somehow sky-hooking the dropping ball back over his head.

Possession
Well. Bad news, Mick. Like some west of Ireland Kareem Abdul-Jabbar, Comer rose to meet Cooke’s shot and with his knees up somewhere in the region of Fitzsimons’s shoulders, swung his fist backwards over his head to punch the score. It brought Galway level on 0-13 apiece with 56 minutes on the clock. Galway were in this. As long as they could find Comer, they were big definitely in this.

Sadly for them and for him, they only managed to get him into the fray another couple of times. For one, he landed one of the points of the day on 65 minutes, taking possession on the 45 and leaving Brian Howard in his vapours before launching a kick into orbit that landed just beyond the black spot. For the next, he got crowded out as he tried to field a high ball soon after and was lucky to stay on the pitch as he appeared to pull a hand-trip on Cooper as the Dublin defender came out with the ball.

It was Dublin’s day. But they won’t forget Damien Comer’s part in it in a hurry.

He is a wonderful player and I would live to think that coaching and football is heading back to a place where guys like him are allowed flourish.

He plays the game in front of him better than most. Has amazing self awareness and body positioning.
I know a lad who marked him this year in Sigerson. Come only got 1 point so on paper it looked ok. Good even. But his honest appraisal was he never got such a hammering. Hammered by a point basically. He thought Come was involved in every single score UCG got. Freakishly strong and deceptively quick too was the other issues.

First paragraph is a brilliant description

I thought he was man of the match. Watched him closely in the first half and his ability to lose McMahon and get into space was unreal. Definitely plays for a few frees though and might have got a black card. Thought Galway could have been more direct into him in the second half.

The few times I’ve seen macmahon in this league campaign he looks a bit off the pace. .

He was definitely man of the match. Kilkenny was only slightly above average.

Looked off it last year too.

Kilkenny pulled the strings when it mattered most.

Half man, half animal, all heart. Handy hurler too by all accounts was asked into the hurlers but declined due to multiple captaincies

Definitely a very busy guy and something a dropped off.

He is clearly a driven and successful guy a d a good chap no doubt. But this “I want to win an All Ireland for my charity” nonsense gets me. Still a bit of playing to the gallery and using where he was from as a sales tool.

We know the story now. And it’s a great one, but its old.

Definitely a very busy guy and something a dropped off.

He is clearly a driven and successful guy a d a good chap no doubt. But this “I want to win an All Ireland for my charity” nonsense gets me. Still a bit of playing to the gallery and using where he was from as a sales tool.

We know the story now. And it’s a great one, but its old.

If Philly was playing in the forwards he’d be getting no game time but Dublin are very short on options in the full back line. Rory O Carroll has never been properly replaced.

No they created a system and kinda tag team formation allied to COS sweeping to cover that loss.
Has to be admired in fairness.

Part of Dublins psychological advantage is they have the fear of God put in teams on counter attack. So teams hold back from going after weaknesses back there.

No they created a system and kinda tag team formation allied to COS sweeping to cover that loss.

Has to be admired in fairness.

Part of Dublins psychological advantage is they have the fear of God put in teams on counter attack. So teams hold back from going after weaknesses back there.

Spot on. I think if Galway had of played even a slightly more attacking game they would of won the game.

There would be a few Dublin players hitting their 30s now. Of the current side you would have McMahon, O’Sullivan, Connolly, Brogan, MDMA, Andrews, McManamon, Flynn and O’Gara hitting that age bracket so certain players will start to or have already started to wane.

The problem for everyone else is that they’re bringing through players who can replace them and guys like Fenton, Cooper, McCarthy, Mannion and Kilkenny are now the leaders of the team.

Dublin did look vulnerable Sunday but they were missing a huge amount of key players and still turned it around with a man less.

Jumping the gun here but are the super 8s neutral venues or home and away?

One home, one away, one neutral I think.