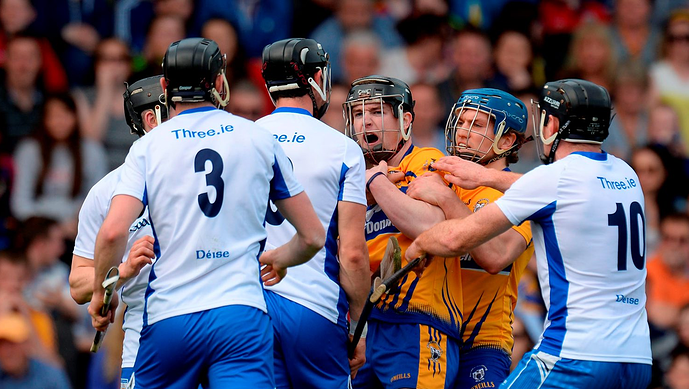 Waterford must go toe to toe with Clare on and off the pitch next Sunday. Great credit is due to Derek McGrath for how he handled the aftermath of the League final replay. The easy option would have been to criticise the referee but if I’m being...

Who will be marking Dan?

What a load of bilge.

Waterford are real classless fuckers in fairness. And that classless ape mullane has always gotten a free ride from the media and the public just by playing the not very smart whole hearted village idiot with a harmless chip on his shoulder.
That won’t last much longer if he continues with this stuff at national level. Clearly Davy Fitzgerald has him rattled to fuck and that has being going for years now

, and he has been weeping real bitterness for a month now.
I hope they get the shit bate out of them. And their vile negative hurling and gurrier antics on the sideline get fucked right back to wahderfurd.

‘And Cusack is so good on match-days that I’m almost convinced Waterford will have to man-mark him on the line.’
You’d think he’s saying this tongue in cheek but listening mullane on the radio I’d say he actually believes it…

Aaron Cunningham is out with a hamstring injury and Conor Ryan is also out while David Mc is till out with a back injury and there are conflicting reports as to whether he will play again this year. We will really need one of Ryan or McInerney back by mid summer and in form as Bugler’s legs look suspect and I would be surprised if he is able for 70 minutes come the height of summer. He has his uses as a spoiler and will do fine if matched up against Brick this weekend but we need more hurling in that half backline.

Aaron Shanagher is pushing very hard for a start.

Surely after conlons performance against kk he’ll be on the edge of the square? O O’Donnell will be doing well to start he isn’t in great form at all.

It will be fluid enough with a few lads spending time in around 14. With Waterford’s sweeper I think we will see Conlon spend a bit of time on the wing drifting in to the full forward line rather than trying to contest ball against Prendergast and De Burca as an orthodox full forward.

Big Darach Honan enjoyed himself in Croke Park last night. Davy won’t like one of his players being out the week before a big match.

Because doddery is one of those fellas who hates to GAA players enjoying themselves. He probably snapchatted Davy a picture of Honan just to make sure.

Apologies, Coughlin. It is hard to remember the names and distinguish between all the mediocre full backs Waterford have had over the last 20 years or so

I’ve fired nothing yet. The powder will be dry for a while yet.

I’ve fired nothing yet. The powder will be dry for a while yet.

Proper order, the Munster Championship is merely a preseason tournament

Is o brien back from injury ?