jews, african slavery, why is there no discussion or commemorations or teaching in schools about the holocaust that happened in ireland?

There’s quite a few holocaust deniers on this forum.

Spell the word correctly in the thread title for a start, or the only discussion will be over what a simpleton you are.

What’s this about now?

He’s on about the ‘Great Famine’. And if your teacher in school is worth his/her salt you will learn about the circumstances around it which mean it wasn’t exactly a Famine. Not sure Holocaust is correct term either though.

That’s what I thought you meant but that is a huge topic in history in irish schools.
Every 11 year old in the country would give you a decent rundown on the famine. My ten year old is quite an expert on it because of a project she did last year.

Why did the famine happen according to her? Or yourself?

She’s 10 mate. She read it from books aimed at children. So I apologise for calling her an expert.
No offence meant to actual experts on 19th century irish history.

Yeah, but what are the books teaching her is what I want to know, kid.

Causes of the famine here from a primary school textbook. 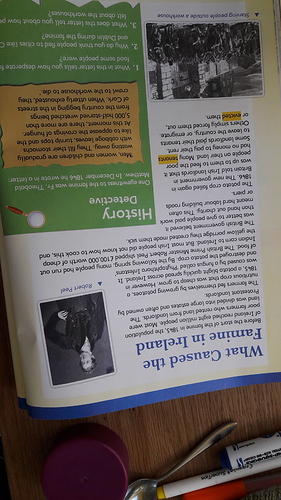 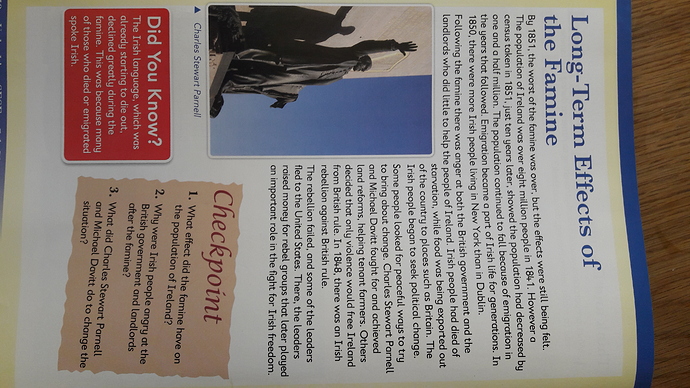 here its closer to 9m

I’ve heard a lot of theories but what actually did happen?

You’d have to go back as far as the plantations to explain it fully.

Luckily for us we have a class 6th class teacher in our school who teaches the kids their history. They love it, and know it thoroughly and properly

Famines are political occurrences. If you want to find out why famine happens in any country, look at the power structure in place.

Yes but the numbers don’t stack up, how does a population go from 10.5m to 3m if 1m emigrated and 1m died?!

I honestly never heard that before!

Very little mention of the catholic barbarism either such as in 1798.