I’ll have to have a think about it myself but great debate point. 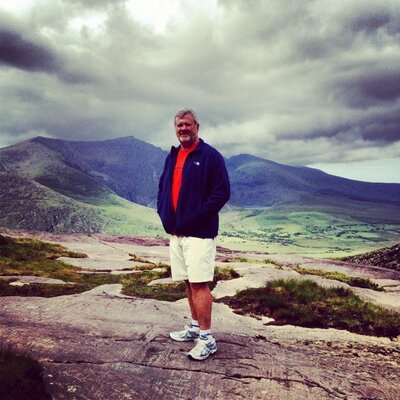 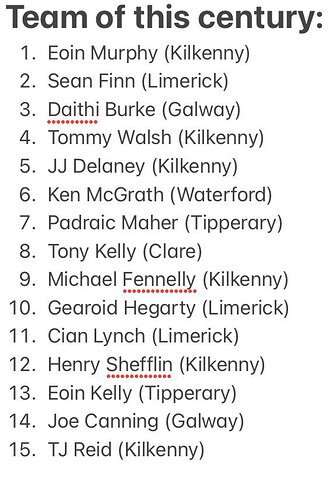 An alternate team to the above.

On the Twitter thread the lack of Cork players is testing peoples resolve. Liston just says back “who do you drop?”

Jerry O Connor over those two in midfield anyway, especially Kelly who isn’t related to a midfielder. Have to think Sean Og is hard done by as well. Red tinted glasses on having no Cork player is just wrong.

Daithi Burke has become the most overrated hurler around. Noel Hickey first of a few more deserving.

The most over rated set of players off any AI winning team.

Gardiner, O Sullivan, Cusack, Sean Og are all lauded in Cork but extremely ordinary in the greater scheme of things.

I could pick a 3rd or 4th 15 and none of the above would come into the equation. Deane, JOC, Brian Murphy and Horgan might is all.

Daithi Burke has become the most overrated hurler around

5 all stars…gave the greatest full back display since Lohan in the AI semi vs Lk in 2020.

Sean Og is not near JJ Delaney or Paudie Maher ffs

Fitzhenry is better than Murphy

And anyone who suggests so hasn’t the faintest about hurling.

I’d have Quaid in goal anyway and I’d have Cummins well ahead of Murphy as well.

He got some roasting in this years semi though. (Nogra pile on incoming)

Declan hannon is a better player than Ken McGrath.

A better centre back is right. Hannon though had a decent wing backs. McGrath was a one man half back line. McGrath a much better forward than Hannon though. Two great players in their own right.

McGrath is sort of a cult hero/free spirit but hannon is just better.

Imo hannon should win hurler of the year too. Byrnes is an incredible free taker but I don’t think he’d a better year than hannon in general play.

I agree with your points on Hannon but you are down playing McGrath. He was much more than a cult hero/free spirit. He had size, athlethism, leadership and loads of hurling. Could do a job on any line of the field.

I wouldn’t have Tommy Walsh corner-back. I’d have him at 5 every day of the week, and JJ at 3 if I wanted to facilitate another wing-back.

Trying to think who I’d have off that Cork team, struggling tbh. Curran over McGrath maybe? Murphy at CB? Ben & Deane were probably the two best, but hard to fit them in with such an abundance of forwards.

Id put cusack in goals just so we wouldn’t have to listen to him before hand.