Any of you fucks play DFS / Fanduel tournaments? I’m addicted to them. I usually play the PP main tournament on Sunday Which include the 6pm and 9-9.30 games (5 euro entry) and i generally play the stand alone Thursday/Monday night games also…

For those not familiar you’ve 60k to spend on your lineup and each player is rated price wise on their match up that week… The top QB/WR/RB are usually around the 10k mark for example. Obviously, stacking from one high scoring game is the ideal tactic.

For tomorrow’s slate im currently on… 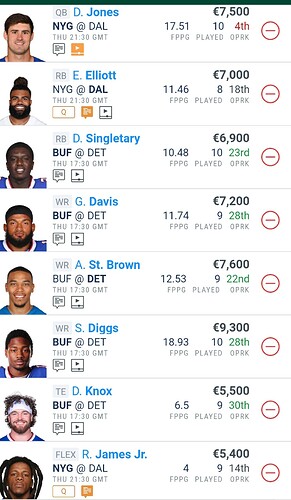 I had Allen in at 9,500 but a seriously reduced cast then. With Jones in i was able to get most of the Buffalo cast and the Ra in… Hopefully James Jr. Stacks up well with Jones. RBs were also pricey and Elliott still gets goal line work and he should score one at least… Budget meant NY or Detroit at D.

I look forward to the scores of replies and in-depth discussion this post should kickoff.

Have you set a line up?

Shur I wouldn’t have a clue what’s going on

@Big_Brian_Lohan - have the Lions secondary injuries?

Yes, Bills will do as they please in the passing game

Diggs will be 50/60% owned tho so i might jig it to take Lamb over Diggs and hope that separates me from the pack. I can work Dak in then as QB. 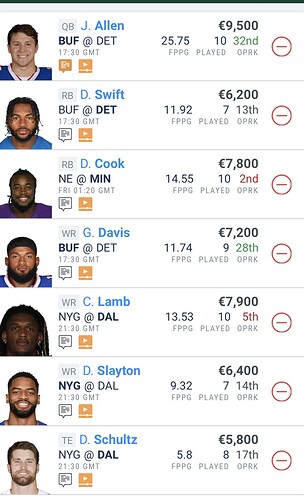 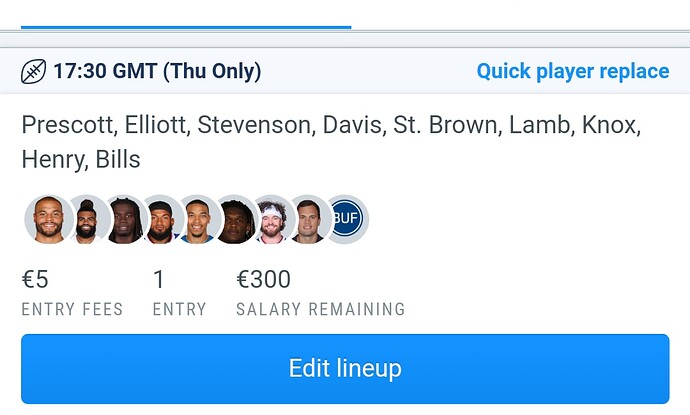 I settled on above… Total dart throw on Hunter Henry that will most likely lay an egg… James Jr still doubtful and im not sure i can trust Chark yet, tho i had him in also.

Hoping Zeke gets a few goal lines and think Giants down a few on their secondary so it’s Lamb dinner for me.

Chark came up with one
…

Would ye take a chance on Mike white this week? He’s cheap enough and opens up big names in skills positions then… Geno Smith the other option but he’s not dirt cheap like white