This is a 13 year old. No offence but u8s is just basically babysitting except for a few rarities that are born with it.

Nah. Id say only about 15-20% could be classed as babysitting of our lot. Most of the rwst would be into it at least.

that’s lucky. I see the young lads training when I have my small one down the field and it looks like absolute carnage. a few lads just gone off the script altogether

They are great craic at that age thou lol

I was coaching U7’s once, mixed gaelic. I had one of the girls in goals, and one of the go boys decided he wants to go in goals and pushes her onto the ground. I roll over to me man, have a few short words with him, and send him out the field onto the opposition team.

Few minutes later hes careering through the defense bearing down on the goals where the girl in question is minding. He loses control of the ball (he didnt have much control on it anyway) and it rolls towards me girl. She comes out, he tears forward, she swings the boot, slices the ball behind the goals, and follows through between me mans legs. Nailed him. Poor divil on the ground in a heap, his 6 year old testicles in shite. Every parent on the sideline chuckling away. I comforted him as best I could, but I like to think he learned a valuable lesson that day.

Its great aul fun that age all the same.

I think it’s Kieran Cuddihy, he might be painful but he wasn’t really totally useless.
He was the Dicksboro fullback for ages, might have played minor or U 21 for Kilkenny and his sisters were Olympians, I think one of them held the Irish 400m record until very recently.

Back in your box!

Cuddihy has gone way up in my estimations. I will probably now find him much less annoying

What is it with the GAA culture on Twitter? Surely he sees that the majority of ‘unofficial’ Sky Sports clips eventually get taken down for copyright etc. so what puts him above that for GAA and TG4?

Had to mute him. He loses his shit over clifford bouncing the ball with his right hand ffs

Are we teaching this enough? He took at least 8 steps in the clip Ray so eh no we aren’t

Glad to see everyone coming around to this. Boyne is an oddball and always has been.

Saw that now he’s had a proper meltdown over it. Hi enda I met you in the dressing room one day

. Does he really do all his coaching and analysis work for free?

He’s an arrogant fuckwit. Glad to see his true colours come to the fore.

I see he’s asked Biden to sort it out now 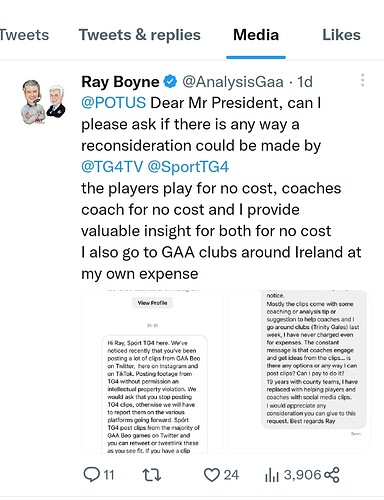 I’d imagine he’s probably getting similar expenses to management but he’d likely only be attending matches rather than training sessions etc too so €0.50 cent to the km probably isn’t big money

Whether he’s ‘charging’ a going rate is another thing then

He’d be paying for use of third party software that he uses for coding, so I’d be very surprised if he’s not making any sort of income from it

I heard that his biggest problem is the he consistently over steps the line. He is a PA, however he feels he should have a say in tactics, training, selection. He’d take serious managing.

I’d always say this - The title ‘Performance Analyst’ in GAA is often used incorrectly. Are you analysing the performance or are you just ‘coding’ the match/actions?

If the latter, then you’re a Data Coder and not an Analyst.

An Analyst reviews the video/data that has been coded and then relays key points to Coaches/Scouts etc (trending data, specific things they’re asked to create for the management team). I’d still say an Analyst by right shouldn’t be involved in team decision-making and DEFINITELY not in tactics but I don’t think there’s a harm in them being ASKED for their opinion. One Analyst might look at something and not be happy with it, but it might be exactly what a coach wanted to see (that’s hard to explain properly)

It’s when they step over the line and start giving players their own individual thoughts is when it’s gone too far.

Ray boyne was embarrassing when Tipp won the 2019 all Ireland, taking pictures with his sons from twenty different angles.

Meanwhile, limericks Seanie O Donnell is up in the hogan stand tidying up in the background. A proper analyst.