Draft season is on the horizon, the journey starts again now.

Cardinals to beat the Bills.

Best wishes to the security staff at next year’s Phoenix Open in Scottsdale if the Cardinals make it to the Super Bowl.

TREY SZN.
Niners are going to do it.

Add in the golf and you have a recipe for disaster

And now time to focus on the most exciting time of the year - draft szn!

Struggling to get excited this year. Shades of the 2013 draft methinks.

Kenny Pickett is working exclusively on hand enlargement exercises until then.

The NFL is a measurables league - maybe Pickett bucks the trend but it has been a long time since a guy with hands smaller than 9" held his own as a QB in the league. It may seem trivial but handsize matters just like arm length does for offensive and defensive line men, there are always outliers but more often than not guys can’t overcome these types of things in the pros and seems to be very defined minimum standards needed - 9" hands for a QB and 34 inch arms for an offensive lineman.

I only found out recently on the Dane Brugler podcast that the NFL football is longer and has a wider circumference compared to the balls used in college which is why handsize isn’t as much of an issue.

The ball size came into focus when Chase was dropping catches in pre-season. Pretty sure I saw some study that debunked the correlation between hand size and propensity to fumble. Pickett had 23 in his first three seasons but like the rest of his stats, improved that massively in 2021 with just one

There may not be a correlation and in fairness he has played in Pitt in fairly cold/wet weather but a number of teams will simply put a line through him if the hands are under 9" regardless.

Joe Burrow had smallest hands of QBs selected in the first round in over a decade and didn’t seem to affect him. I think teams overthink it with these measurables. Lucky teams took a chance on Tom Brady and Cooper Kupp.

Looking at Russell Wilson, his hands are fucking massive.

Packie Bonner would have made a great quarterback and punter.

But it does, there are always outliers. Joe Thomas had relatively small arms for a tackle, it didn’t stop him. But it is pretty much a bell curve on these measurables. There are maybe 10% who can overcome small hands, or short arms etc in the pros as they have other physical gifts to make up for it, but the other 90% can’t overcome it or it will always be an issue. 9" seems to be the minimum threshold - think Goff and Murray have 9" hands too. 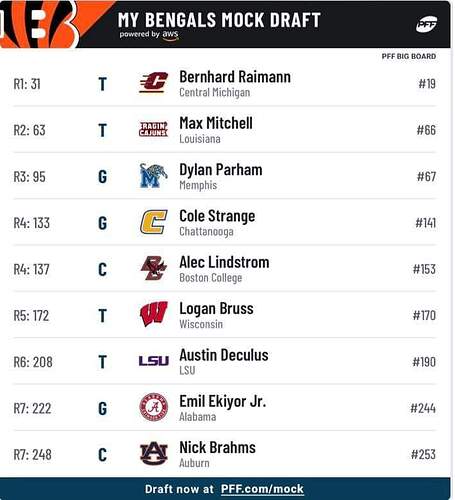 You think he is slightly concerned about the O line?

I think Cincy have been fully vindicated in taking Chase over Sewell last year. This decision was widely questioned by many (myself included) with Burrow rehabbing an ACL from the battering he took in 2020. They’ll go hard on the OL this year alright.