Will watch it later this evening. Looking forward to the mini-series.

Watched the first 30 mins there before I started work. Great so far anyway

I haven’t checked yet but I’d be surprised if it doesn’t come up on your home page as a featured item. Plug in Beatles into the search and it will come up.

Between this and the Tom Brady series, my life is complete right now.

Where can you find the Tom Brady series?

Inject it into my veins.

Disney+.
I have the Disney channel and assumed when I switched it on this morning that the Beatles doc would be front and centre of the home page or whatever. I had to do a bloody search for it! Although the main reason for that is probably my most viewed programme on Disney is Mickey Mouse’s Clubhouse

Not watched it yet but reviews say it shows MCartney casting for a song and reeling in Get Back.

Watched the first ep this morning. Even if you don’t like them you’ll like it I’d say

Hard to believe anyone wouldnt like The Beatles, but I’m certain theres a few on TFK if anywhere.

The Beatles: Get Back, review: Peter Jackson’s epic edit is truly fab, but too long and winding

This painstaking work has distilled 200 hours of video and audio into a frequently exhilarating, exhaustive three-part series 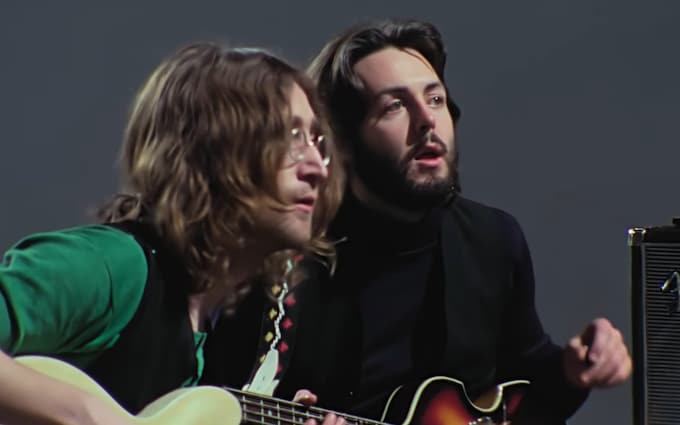 Two of Us: the Lennon and McCartney songwriting process is seen in the documentary CREDIT: Disney

As a scruffily bearded Paul McCartney sings a snatch of Oh! Darling at John Lennon, his bespectacled band mate smilingly declares: “It’s like you and me are lovers.” “Yeah!” agrees McCartney, grinning with loopy happiness, while George Harrison and Ringo Starr gaze cheerfully on. “We’ll have to camp it up,” suggests Lennon. “Well, I’ll be wearing my skirt on the show,” smirks McCartney.

The Beatles are back, in living colour, captured in their creative prime writing songs, playing music, cracking jokes and making pop history. Five decades since they broke up in disarray, this much hyped documentary restores some sweet harmony to the final act of the world’s most beloved (if occasionally dysfunctional) band.

Debuting on Disney+ today, The Beatles: Get Back , Peter Jackson’s painstaking restoration of footage from the Let It Be recording sessions in January 1969, is a work of huge affection and accomplishment, sure to put a smile on the face of every Beatles fan. But be warned, there may be some grimacing and yawning and worse along the way, and not just from the Fab Four themselves. Because painstaking is the operative word.

The Oscar-winning director has taken 60 hours of fly-on-the-wall 16mm film footage and 120 hours of audio, burnished it up to modern digital standards and edited it down to three episodes for streaming, each of which is well over two hours long, amounting to a running time close to eight hours in all. That is almost as long as Jackson’s Lord of the Rings trilogy, during which not a huge amount actually happens. Of course, what matters is exactly who it is not happening to. “I farted!” Ringo casually announces in episode three, a moment of flatulence from the most famous drummer on earth preserved for posterity. 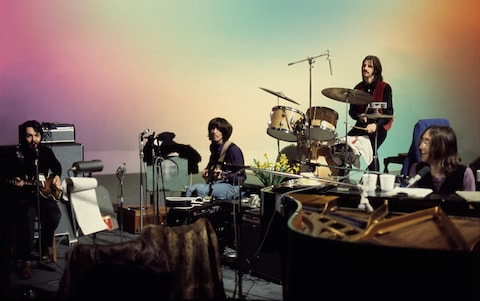 Dig It: the Let It Be recording sessions were filled with inspiration, as well as friction CREDIT: Apple Corps Ltd/Linda McCartney

Each episode is preceded by the warning: “This film contains mature themes, explicit language and smoking.” And, indeed, there is a lot of smoking, with McCartney puffing on cigars, Harrison sticking lit cigarettes on guitar strings in case he needs a drag mid solo, and all and sundry advocating for constant fag breaks when they are not chomping on toast and calling for more cups of tea. It is a portrait of a band at work in a rehearsal studio, which is not particularly a spectator sport. Asked his views on whether they have a commercial feature after nearly three weeks of filming, original director Michael Lindsay-Hogg takes a break from puffing on his own cigar to note that “what we’ve got is a film about smokers, nose-pickers and nail-biters”. “We are very uncouth,” admits McCartney, scratching away at his own beard.

Jackson doesn’t shy away from any of this. His detailed edit can tuck into the writing and rehearsal of a song for 20 minutes, or spend long periods dwelling on scruffy, tired men having polite yet nit-picking arguments about what exactly is the point of the film they are making. Lindsay-Hogg’s original 1970, Let It Be, was (perhaps unfairly) deemed a disappointment, because it showed a popular band breaking apart over 80 minutes of grainy film stock.

Yet perspectives change with time and the point for contemporary viewers is that the songs we see taking shape are intimately familiar to us, masterpieces of the calibre of The Long and Winding Road and Don’t Let Me Down gradually cohering in acts of constructive, collective genius. And the apparently mundane conversations illuminate the characters and relationships of now historic figures who shaped our pop world at a moment when they themselves were struggling to find reasons to continue. “Maybe we should have a divorce,” suggests Harrison as differences become manifest. “Who’d have the children?” responds Lennon, clearing the air with humour.

This is effectively one for all the Beatles’ children, all of us fans who never really got over our favourite band splitting up. Because Get Back demonstrates how much they genuinely cared for each other, climaxing with their famous final concert on the rooftop of their Savile Row offices. The problem for Disney, I fear, is that Jackson’s obsessional curatorial approach means that this epic documentary takes a very long time to achieve lift off. 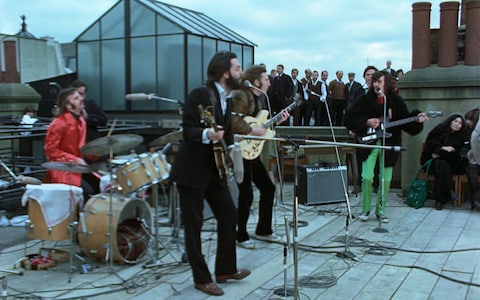 Let It Be: the rooftop gig in Savile Row was to be The Beatles’ last CREDIT: Apple Corps Ltd

Episode one (which debuts today) depicts the group getting to grips with a huge, cold, acoustically challenging film studio in Twickenham, whilst Harrison’s mood visibly darkens and Lennon (and his constantly present yet silent partner Yoko Ono) seem to drift in a state of lethargy. Determined to defuse tensions, McCartney presciently observes that “in 50 years time its going to seem comical that [we] broke up because Yoko sat on an amp.”

McCartney is the emotional heart of the series, sometimes needy, sometimes irritating to his band mates, but always invested in the bigger idea of the Beatles. In episode two (streaming from Friday), after Harrison briefly quits and Lennon doesn’t show up for rehearsals, Jackson lingers in slow motion on McCartney’s tearful expression. “And then there were two,” he tells Starr.

A frank off-camera sound recording of a conversation catches McCartney telling Lennon “I always thought you were the boss”, reinforcing what everyone can see for themselves: just how much McCartney longs for the approval of his old songwriting friend. Things pick up with Lennon energised and increasingly assertive as they relocate to the more intimate basement of Apple HQ, with Harrison returning in a sunny mood, his creative frustrations allayed. By the time we reach episode three (released on Saturday) it is all a joy.

What is particularly lovely is witnessing the degree to which the Beatles support and encourage each other’s creativity, whether it is Harrison helping Starr compose Octopus’s Garden or Lennon and McCartney amending each other’s lyrics and singing each other’s songs (McCartney performs Strawberry Fields, I’m So Tired and Don’t Let Me Down, whilst Lennon plays a wistful I Lost My Little Girl).

Amid goofy humour and wacky jams with a terrific Billy Preston, the Beatles build up to a final performance where the connection between them is absolutely electrifying. As their long-time producer George Martin appreciatively notes: “You’re looking at each other, you’re seeing each other, you’re … just happening!” It is a treat to witness this for ourselves, and see the Beatles back where they belong. But if it’s been a long time coming, it sure takes a long time getting there. 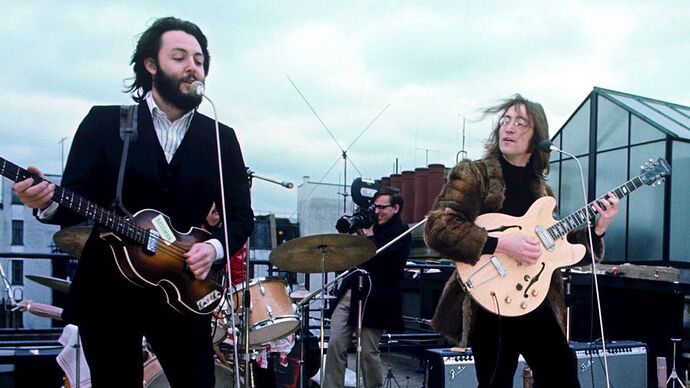 The Beatles: Get Back

Read the Empire review of Peter Jackson's documentary series on the Fab Four. 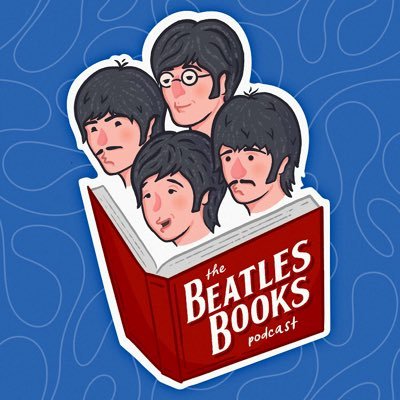 The Beatles were so omnipresent in my youth that there wasn’t any great imperative to “get into them”. You could hear them every time you turned on the radio. Plus the Beatles were cultural behemoths, although they had split up they dominated the cultural landscape of much of the 70s. Paul McCartney and Wings, The Plastic Ono Band, the concert for Bangladesh, Thomas the Tank Engine. And the 80s the death of Lennon, Ebony and Ivory ffs. They were everywhere. For someone who liked to think he was somewhat anti establishment there was nothing to connect me to the Beatles really. I had the tape of the Blue Album but most people did.

It was only in later years when the broadcast output began to peter out that I found the space to explore their music a bit. Unusually for me I prefer their later stuff. Stuff like Love me Do and I want to hold your hand still grates with me. “Something” is my favourite Beatles song. Perfect in every way even in its refusal to give one more blast of the chorus leaving you yearning for more. And it’s guitar chords inspired glam rock, particularly the David Bowie, Mott the Hoople variety.

Hard to believe anyone wouldnt like The Beatles, but I’m certain theres a few on TFK if anywhere.

Wings, the band the beatles could have been

I remember there used to be “The Beatles Hour” on Tuesday nights on Radio Luxembourg in the late 70’s/early 80’s. There isn’t a lot I would listen to earlier than “Rubber Soul” but there are a few good songs on "Hard Days Night”The red and blue tapes were in the house and were among the first vinyl records played when the brother brought the first record player into the house.